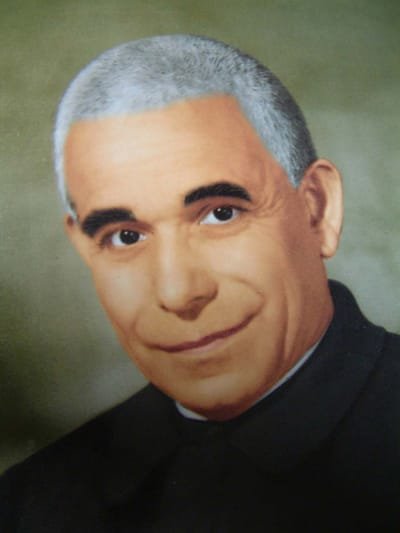 The Madonna Queen of the Universe National Shrine is managed by the Don Orione Fathers (Sons of Divine Providence), a Catholic Religious Congregation founded by St. Luigi Orione.

Know more about this great and modern day saint...

Luigi Orione was born into a poor family at Pontecurone, in the Province of Alessandria, in the Piedmont region of Italy, on the vigil of the feast day of the Nativity of St. John the Baptist (June 23, 1872). He was named after Saint Aloysius Gonzaga and Saint John the Baptist. He was baptized the next day by Fr. Michele Cattaneo, the parish priest of the town. His father, Vittorio, was a street paver of few words and his mother, Carolina, was an energetic, pious, thrifty homemaker.

At thirteen years of age he entered the Franciscan Friary of Voghera (Pavia), but he left after one year owing to poor health. From 1886 to 1889 Orione was a student at the Valdocco Oratory in Turin operated by the Salesians of Don Bosco. There he gained the attention of St. John Bosco, the founder, who numbered him among his favorite pupils. From the age of 13, Luigi began to suffer health problems. However, three years later, in 1888, he was present at Bosco's death in Turin in 1888. At that moment his ailments were miraculously cured.

Orione was determined to become a priest and entered the seminary of the Archdiocese of Turin. He became a member of both the San Marziano Society for Mutual Help and the Society of Saint Vincent de Paul. In 1892, inspired by the education he had received from the followers of St. John Bosco, the 20-year-old seminarian opened his own oratory to educate the poor boys of the city, and the following year he started a boarding school for the poor. He was ordained a priest on April 13, 1895.

Starting in 1899, Orione started to gather a group of priests and clerics that were to become Piccola Opera della Divina Provvidenza (Little Work of Divine Providence). In 1903 the group received the full authorization of the bishop as a religious congregation called the Sons of Divine Providence.

One of the priests who was in his inner circle was Lorenzo Perosi, who later became Perpetual Director of the Sistine Chapel Choir and one of the most famous composers of sacred music. Perosi was born in the same year and the same region as Orione; they remained lifelong friends.

At the end of World War I, Orione began to expand his work. He founded schools, farming colonies, and charity organizations and nursing homes—always with a special emphasis on helping orphans and the poor. Over the next two decades, he started foundations throughout Italy and the Americas.

In 1931, he founded the Shrine of the Madonna della Guardia in Tortona, which to this day is the principal church in the world for the Orionine order. It is also a center for annual music festivals in honor of Orione's friend, the hitherto mentioned Perosi.

In the winter of 1940, Orione started to suffer serious cardiac and pulmonary ailments. He went to Sanremo to recuperate, but not without a tinge of regret since he wanted to spend his finals days among the poor. On March 8, 1940, on the eve of his departure for Sanremo, Don Orione is recorded as saying, "It is not among the palm trees that I would like to die," he said, "but among the poor who are Jesus Christ." Four days later, surrounded by fellow priests of his Orionine order, Luigi Orione died. His last words were, "Jesus, Jesus! Jesus! I am going..."

Saint Luigi Orione's mortal remains have rested in the crypt of the Shrine of La Madonna della Guardia in Tortona, which he himself founded, since his burial on March 19, 1940. His body was later exhumed in 1965 and found to be incorrupt. On October 26, 1980, he was beatified by Pope John Paul II. Nearly 24 years later, he was canonized by that same pope, on May 16, 2004.

Today the charitable organizations begun by Orione are still operating in abundance throughout the world. In the United States, the national shrine and headquarters of the Sons of Divine Providence is located on a well-known hill in East Boston,

St. Luigi Orione, pray for us!